Renowned Pediatrician, and Chairman HANDS Prof. A.Ghafar Billoo has said that HANDS has allocated Rs. 60 million for the construction of its Provincial Disaster Risk Management Center (PDRMC). Speaking as Chief Guest on the occasion of Inauguration, he said that HANDS is emerged as the most prominent NGO in the Country to provide relief to underprivileged people. He said that we are catering to the disaster affected people through providing health, education & employment opportunities to them besides repairing & construction of their home. We are establishing a Provincial Disaster Risk Management Center by the support of Medico International of Germany and HANDS Philanthropists. Prof. Billoo has urged the Government and other Concerned peoples to make proper planning to Combat disasters for this purpose he urged a proper and well connected coordination between peoples of NGOs ,local, Provincial and federal resources.On this occasion he highlighted the importance of 14 th August in the lives of Nation where in all people of Pakistan will become a cohesive Nation. On the same occasion HANDS chief Executive ,Dr. Tanveer Ahmed Shaikh C.E HANDS spelled out the details of HANDS mission to serve healthy educated and equitable society and especially highlighted work of 85790 families rehabilitation through provision of one room houses in 20 Districts of Pakistan,which called Pakistan ‘s largest Shelter Project. 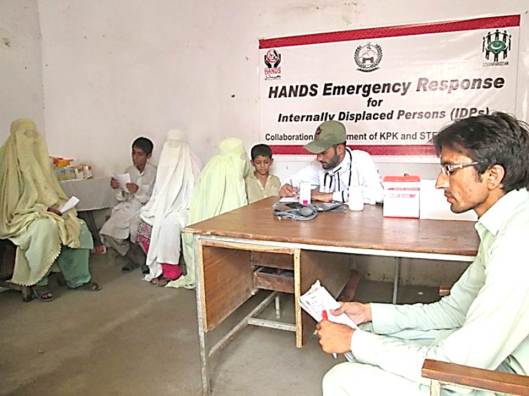 HANDS was founded by Prof.A.G.Billoo (Sitara-e-Imtiaz) in 1979. HANDS has evolved in 34 years as one of the largest Non-Profit Organization of the country with integrated development model. HANDS has a network of 30 offices across the country and has access to more than 16.2 million population nearly 20,274 villages/ settlement in 34 districts of Pakistan. HANDS strength is 18 volunteers Board Members, more than 1502 full time staff and nearly one million community based volunteers of 5205 medium and small size organizations.

HANDS Disaster Management Program aims to reduce, or avoid the potential losses from the hazards, assure prompt and appropriate assistance to victims or survivors of disaster, and achieve rapid and effective recovery.

HANDS Disaster Management Program responded to major disasters in Pakistan – the Badin Cyclone in 2002, the Northern areas and Kashmir Earthquake 2005, the flood emergencies of 2010, 2011, 2012, 2013  in Sindh, Punjab and Balochistan; Earthquake in three districts of Balochistan in 2013, and recently in drought Emergency at Tharparkar (March 2014). HANDS Pakistan worked with integrated approach with Public sector stakeholders and communities to minimize losses, manage the vulnerabilities, provide relief, supports in recovery and then rehabilitation through contructions and provision of livelihoods. HANDS has vast experience to deal with emergency responses during the recent disaster in Pakistan.

Drought in Tharparkar in March 2014: Emergency Response was initiated within 5 hours and Relief package was provided to 6,000 families in 2 months.

As of 7 August, PDMA reported 1,000,428 people (95,109 families) registered as displaced from North Waziristan Agency. All registration points except in Kurram Agency are closed. According to the FATA Disaster Management Authority (FDMA) more than 993,116 Individuals /  peoples  (93,239) families have been registered those are displaced since the start of the operation  While the verification process is ongoing;  As of 31 July, NADRA reviewed the registration data of 93,239 families; 53,186 families (57 per cent, 581,459 people) were verified while 40,053 families (42.9 per cent) were rejected.

Mostly IDPs are coming to District Bannu, while some  goes towards District Lukki Marwat, Tank, Karak, Kohat , Hangu  and Dera Ismail Khan. Grievance desks have been established to facilitate families with documentation issues. The priority needs remain food, health, protection and water, sanitation and hygiene (WASH) activities. Urgent funding resources are needed to continue to scale up the humanitarian response.

HANDS Pakistan has started its Emergency Response for affected families of North Waziristan initially its own resources and now with the partnership of STEUN Pakistan. HANDS has got letter of collaboration from Ministry of SAFRON as well as got facilitation letter from Provincial Disaster Management Authority KP. HANDS initiated health services through conduction of Mobile Medical Camps with support of District Government Bannu, KPK Government, Health department, FDMA, SAFRON secretariat. HANDS teams has planned health education sessions on Health & Hygiene in the IDP camps at and different places  in different UCs of  District Bannu and at fixed Government BHU Chandni  Chowk.

Total 1,575 patients were treated by HANDS Medical team in 18 days and most of them were children which are 40%, 34% female and 26% male were also given medical facilities by HANDS team.

Coordination Meeting with NGOs , INGOs and representatives of UN Agencies at KP:

HANDS Peshawar & Bannu teams Conducted meeting with NGOs / NHN , representatives of INGOs and representatives of UN agencies, OCHA, WFP, WHO and UNHCR working in the Province and briefed  them regarding HANDS Pakistan Emergency Response  for IDPs in KP.

Considering the previous track record and reputation of HANDS in emergency response; HANDS was called by Ministry of SAFRON and PDMA to extend the services. Considering the current situation in the area HANDS has shown the willingness with Government of Pakistan to start relief operations in affected areas through HANDS Peshawar office. HANDS has plan to provide emergency relief assistance to 25,000 families.

This program supports the provision of food, water, shelter, health care, nutrition and protection assistance to people affected by natural disasters and complex emergencies. In the current  situation in the North Waziristan, one of the FATA region, the displacement is towards the KP districts including the Bannu, Lakki Marwat, Tank and Dera Ismail Khan. The following plan is proposed includes immediate emergency relief and then extended short term plan.

HANDS is seeking for financial assistance to provide the following packages to 25,000 affected population.

HANDS Pakistan will provide medical services through it trained health care providers. Rs. 112 (£0.7) is required to provide the quality healthcare to one IDP.

Considering the hygiene and protection issues and previous experiences of HANDS; Rs. 3,265 (£20.4) are required to provide the NFIs & Hygiene kit. One solar light and one jerry can will be provided under NFI package and hygiene kit package will be comprised of towel, nail cutter, comb, sanitary cloths& dental powder.

Cumulative Requirement =+ (Unit cost is calculated for per family):

After passing of the Bill child marriages restraint Act  2013 ,in Provincial Assembly of Sind, there is still increase in the Child marriages which is leading to high rate of Maternal mortality in the Region. It is also becomes a question mark on the efforts of Present government to combat this issue.

In order to overcome this problem HANDS in Collaboration with RutgersWPF launch an awareness campaign, through this project “Awareness to Action” and trained 300 young peoples to create awareness among masses in various areas of Sind Province which aims health of girls & to ensure safemotherhood.  On this occasion HANDS officials said that we are putting our efforts to curb early marriage issues which cause early pragnancies and resulted in several complicated health problems for young mothers and new born child.

A consultative meeting of stake holders including Civil Society, Media and Government dignitaries has been arranged to address the Health & Rights of young girls especially to highlight teen age pragnancies due to early marriages and how to stop these practices. In this occasion apart from media representative and civil society high officials from Health department was also presented. Health department Dr.Abdul Shakoor  said that the condition of maternal health is not upto the mark in Pakistan especially our rural women are still dependent on unskilled birth attendants.

The Civil society experts stress to  improve the access to free medical services and urge for the serious measures by authorities to stop marriages before eighteen and formulate appropriate strategy to implement the law of Child Marriage.

HANDS IDEAS program intervention solar light is changing lives in rural areas of Pakistan, struggling to rebuild after the country suffered devastating floods. The adverse effects caused by the estimated one billion people living off the grid in poor countries who use kerosene lamps for lighting often outweigh their benefits. This intervention helping them to replace kerosene with solar lights.