HANDS has been working in rural remote non – LHW areas with the Marvi workers model for improving the nutritional status of under 5 year children, Pregnant and lactating women. The Marvi worker under the supervision of LHV conducts screening of malnourished children and provides services to identify malnourished including provision of supplements and counselling. Under this initiative the communities are mobilized to adopt healthy behaviors and prevent malnutrition focusing the under 5 years children 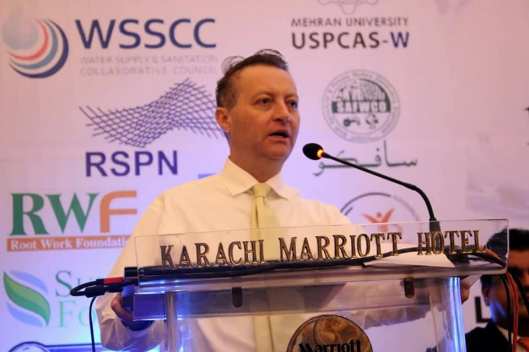 Speakers at a conference on sanitation in Sindh on Thursday called for including strategies to provide safe drinking water, improving the existing sewerage system and provision of resources to the cities of the province in the Sindh government’s list of main priorities.

The first Sindh Conference on Sanitation was organised by the Sindh local government ministry in collaboration with USAID, HANDS and WASH sector partners at a local hotel.

The speakers at the conference urged that global agreements on water and sanitation system should be followed. 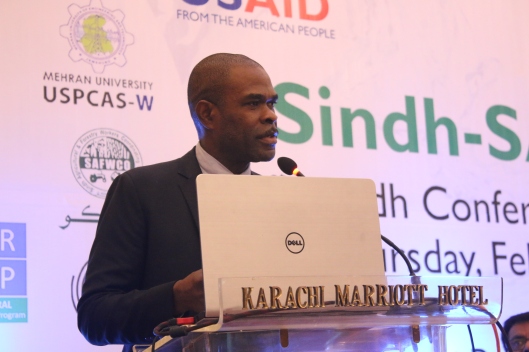 Oghale Oddo, USAID deputy mission director Sindh and Balochistan, said there was a dire need to work on sanitation in Sindh to improve the existing conditions.

He said sanitation problem should be removed with the collaboration of local communities.

Appreciating the HANDS’ effort, he said it reflected the future would be better.

Local Government Minister Jam Khan Shoro said the Sindh government had realised that millions of people had no access to safe water and sanitation facilities. 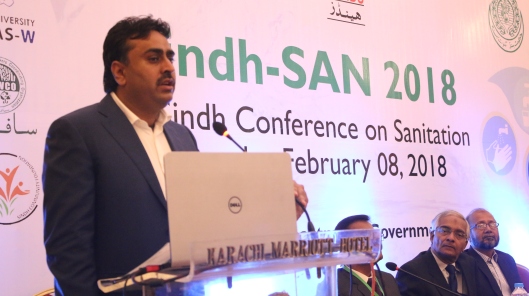 He said the Sindh government had taken up the issue as a challenge with the resolve to improve the sanitary conditions across Sindh.

Murtaza Baloch, special assistant to the chief minister on katchi abadis, said because of certain legal complications water and sanitation facilities had become a big problem. 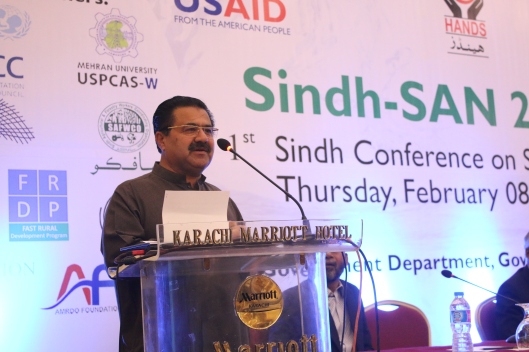 However, he added the issue would be resolved soon with special focus on katchi abadis.

Fahim Junejo of the local government ministry said almost one-fifth (20.2 per cent) of the population of Sindh still defecated in open. 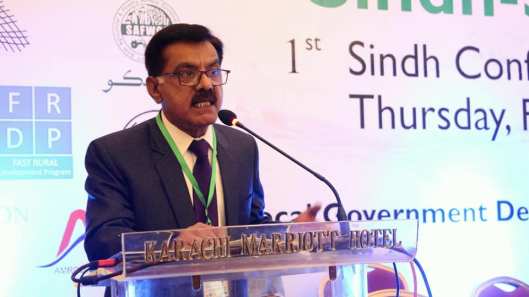 He said some 47.7pc of the rural population of Sindh had been provided with sanitation facilities. He said only 54pc of people in the rural areas wash their hands with soap before meals. 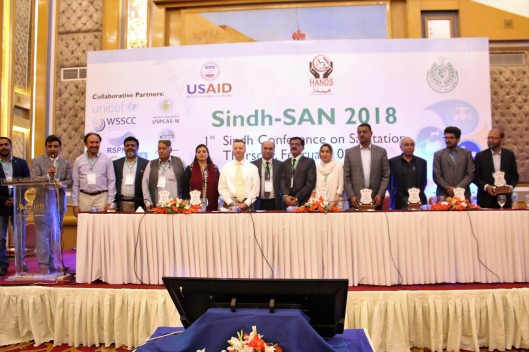 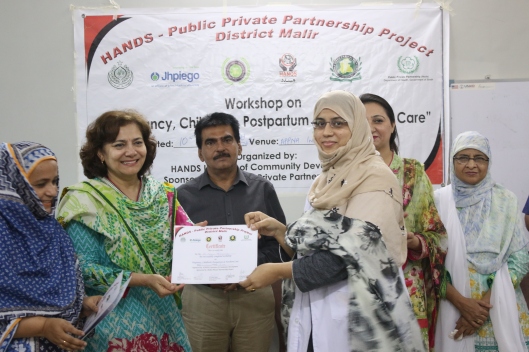 After this intervention number of enrollment has increased especially who left school due to different reasons. Out of school children are re-enroll to continue their academic education right.

Background:
Karachi is a multiethnic, multicultural, multilingual and thickly populated city and is divided in urban and rural. The urban part is highly developed but on the other hand the people of rural are lagging behind in the fundamental needs i.e. education, health, drinking water, sanitation and shelter. Poverty, illiteracy and limited sources of economic generation has compounded the issue. Mostly Sindhi and Baloch communities are living in the rural areas.
The process of social mobilization and activism was started in 1979, when Prof. Dr. A.G Billoo (Chairman, HANDS) started probing the women of the Karachi rural about the health issues they faced when they came in Civil Hospital Karachi. He initiated his social work with the support of his friends and students and started vising the rural areas. During discussions/meetings with communities he analyzed that there is a dire need to offer the health services to these villagers particularly women and children. Consequently, a first health center was established in Memon Goth then another one in Dur Muhammad Goth. At both ends; Prof. A.G Billoo and community leaders were committed to serve with full dedication.

Shifting vision:
In 1997, SPO intervened in Malir District with a project of capacity building of CBOs and 10 of them were selected.. Fortunately, the most of the workers of HANDS were nominated by CBOs to attend the training program conducted by Mr. Ghulam Mustafa Baloch. Theme of the training was Development, Planning and Management (DPM). After completion of the training it was realized that these trained workers should meet to discuss issues beyond the villages and play their part at an expanded canvas. Thus, collective platform of CBOs was formed with the name of MIU and then DESTAC. However various conflicts come out which were resolved by Dr. Shaikh Tanveer Ahmed CE HANDS who played a pivotal role in resolving them and the result was the merger with consensus. A new organization came in to being with the name of Karachi Rural Network (KRN).

Currently, KRN is working with several partners and is also working as a partner with HANDS in its project to improve the public health facilities of Karachi rural. Efforts are being made to shape KRN as a think tank.

Significantly KRN is going to establish a Human Resource Development Center and Secretariat. The center will offer the services to youth in the shape of library, computer lab, digital lab, job preparation and placement and competitive exam preparation.The center will also establish media house and research and development unit. Chairman District Council Karachi has approved Rs. 10 million along with Rs. 2 million annual grant for the purpose. The leadership of KRN is convinced that such center will become the major contributing source for the future of youth and people of Karachi Rural.

Lesson Learn:
The life of the organizations/networks is never smooth. Every organization experiences ups and downs. The major things which save and develop organizations are will to perform, respect, reciprocity, transparency

HANDS with the collaboration of philanthropist funding is running the MISALI project in 13 districts of Pakistan. The target is to achieve 20,000 model communities both in urban and rural settlements. The goal of MISALI Model villages is to relieve them from poverty, illiteracy and illnesses.

This is an integrated project including Livelihood, CPI, Wash, Social Mobilization, Health, and Education & Gender. The main objective of the project is to support the local community in their basic needs such as capacity building, improve WASH and sanitation facilities, support in livelihood and enterprise development trainings, and provide basis health and early childhood education facilities. 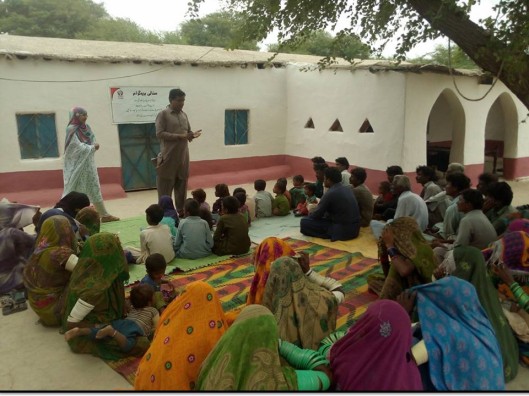 HANDS International at Turkey distributed food parcels to 150 Syrian Refugee families with the support of International Blue Crescent IBC for one month. The objective of the distribution was to support the affected families in their food needs.

HANDS Social Mobilization Program conducted three days training of Community Based Organizations at District Sanghar under Community Development Project (CDP). Objective of the training was to develop skills of local communities in Chotari Dam. Main topics were Leadership Skills, role of Community Based Organizations in development of village, record keeping, roles and responsibilities of members

HANDS is taking initiatives to mainstream persons with disabilities (PWDs) into development. For this purpose HANDS has also adopted Independent living Center in Karachi through philanthropic funding.

HANDS in collaboration with other organizations working on disability, assist communities in Multi Year Humanitarian Program – MYHP areas of intervention for assistive devices (wheel Chairs, White Cane etc.) In HANDS areas of intervention. District offices are regularly reporting and updating PWDs in the respective communities for different assistive devices. HANDS in collaboration with Saaya Association of Pakistan arranged a program of Wheel Chair distribution in July 2017 for Persons with Disabilities from different districts of Punjab. More than 100-wheel chairs were distributed.